What are the rules of play for an Ace Race event ? 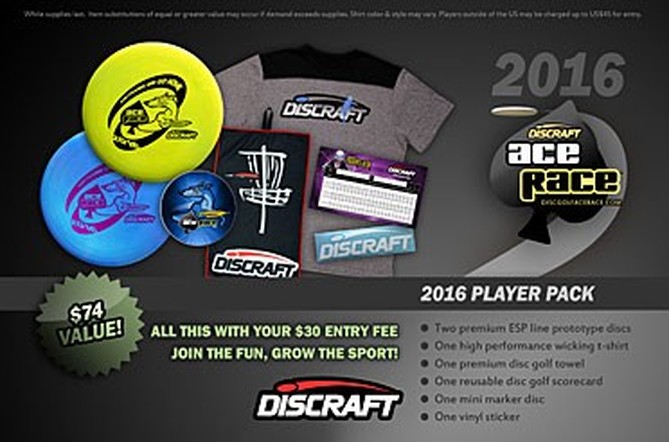 The 2016 Ace Race Player Pack from Discraft.
Players are required to use the discs provided in their players pack, and  only those discs. If a disc is lost, the player has the option of using the second disc from the package. Only one throw per player per  hole. All players should have their own scorecards and mark "A" for aces (a hole-in-one) and "M" for holes on which they hit metal.  After all players in the group have thrown, discs are picked up and the group moves directly to the next tee. Players keep their scorecards for each round of 9 holes, with each round recorded on a separate line on the scorecard.  The player with the most aces after 27 holes is declared the winner. In case of ties, the number of metal hits is used as a tie breaker. If a tie persists, a closest to the pin contest is then used to determine the event winner.

Are there different divisions or age restrictions?

There are no divisions in an Ace Race because everyone competes with all other entrants.  Young or old, male or female, everyone is welcome to participate in the Ace Race.  All players (age 18 or older) must sign a waiver/registration form to participate.  Participants under age 18 must have a parent/guardian sign the waiver.  Blank waivers will be available at the Ace Race sign-in or a copy of the waiver can be printed, signed and brought to the Ace Race on August 18.  Click here for the waiver.

What does the winner receive? (besides bragging rights)

The L-burg '127' Ace Race VI will consist of 27 holes (3 different tee areas for each of the 9 baskets) making this an event of basically 1 round of 27 holes (get it? It will be a 1 - 27 hole event).  Each tee area for all 27 holes will be marked with marker flags.  Players will play all 3 tee areas of a basket and after all players in the group have played the group will move on to the next basket.  All tees will be marked 127 feet from the basket.  Some may be uphill, some downhill, some flat, some obstructed but all will be 127 feet from the basket.  Players get 1 throw per hole.  If an ace is thrown then the player records an "A" for that hole on the scorecard.  If the player does not get an ace but does hit some part of the basket (the pole, basket, chains, or yellow band), the player records an "M" for that hole on the scorecard.  If nothing is hit on the throw then nothing is recorded on the scorecard for that hole.

Mulligans are optional and may be purchased at the time of sign-in.  A player may purchase a maximum of 9 mulligans.  Mulligans will be available for purchase in groups of 3 for $5.  Mulligans may be used at any time but only 1 mulligan per hole is allowed and must be thrown with the players 2nd Ace Race disc.  If a player elects to throw a mulligan, he or she will record the better of the 2 throws on their scorecard.

Because everyone will be playing using discs supplied in the player's pack, all participants must be pre-registered and pre-paid by the deadline date of August 3, 2017.  That will allow time for the tournament director to order the correct number of play packs and have them ready for the L-burg '127' Ace Race VI.   The entry fee will be $30.  There are no separate divisions, everyone is competing against everyone else.  Remember,  all throws will be from 127 feet.

Everyone is in the same division.  Entry fee is $30.

Each hole of the 9-hole Anderson County Community Park Disc Golf course will have 3 designated tee areas marked, each being 127 feet from the basket.  A total of 27 holes will be played.  A shotgun start format will be in place.  Once play starts it will be continuous until everyone has played all 27 holes.

Registration will be cut-off when the tournament field reaches 54 players (or August 3, when players packs will be ordered).

Player packs will be given out at the player's meeting just prior to the start of the Ace Race.  Players must be pre-registered and pre-paid in order to receive a players pack.